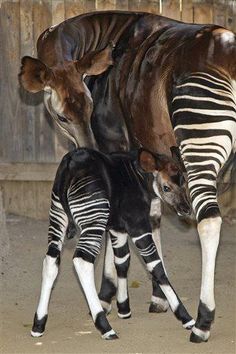 Over a steaming cup of tea, I was foraging my wonted hunting ground on the newspaper, when my eyes alighted upon a queer creature with a cute, dainty calf beside it. Zooming in my hazy eye lens, I started fumbling about in the dark of my foggy cerebrum to track it down to the depths of the memory warrens, but all in vain.

After having embarked on a short stint in Bsc- Zoology at Mar Ivanios College during the nineties which had lasted only for one short month till the medical entrance results came out, subsequent to which my professed grip on the subject could in no way, shape or form be embellished beyond the morphology of cobra, rattlesnake and Russel’s viper lying in state in their eternal sleep within formalin jars or the ticks, mites, and lice spread-eagled on glass slides under the microscope. Ever since that time, I had cloaked the yen for the exotic mien of a Zoologist in secrecy, at times putting on a pedagogic air exhorting my lad to make peace with the roaches, that rise like zombies during those hushed inky nights, from the languorous underbelly in the artful arthropodous section of his Biology text, but in the long run laying bare my primal fear and sending the roaches fleeing in the pandemonium of diabolic screeches.

Slowly but surely, the whiff of entomophobia started to sink in, crumbs of zoophobia crept in, the winged spirit of inquiry sent flying, naked truths dawned in, that I would never have had cohabited with the critters of the animal kingdom where roaches are the gatekeepers. Thus, even the last embers of interest been snuffed out, nothing animalic held any more allure outright. Such has been my humor when I caught sight of this picture, yet so much queerish the mother doe appeared, all the more so with her baby calf, stirring the curiosity up once again.

A wild goose chase inside the braincase having miserably misfired, I trained my eyes on the fine print and rummaged through the details. Let me disclose the name of my protagonist – Okapi, a.k.a forest giraffe. Classified as endangered and so adopted by zoological centers and bred to ensure propagation, its head is similar to a giraffe sans the long neck, the body akin to a horse with velvety soft fur while the rear end features horizontal white stripes of a zebra, a mishmash of sorts, the Creator’s plan gone awry.

I am not confabulating about the chimerical fire-breathing hybrid beasts of mythology or the ominously seductive mermaids of folklore( No, not yet demented). Such an amalgamation do exist, indeed! And it has nothing to do with giraffes, horses or zebra. This particular Okapi in a Zoological Centre( in the middle-east) has hit the headlines, not for any wrong reasons, but for bringing forth its calf, endearingly named, Kito meaning “precious child” in Swahili. They are strict vegans and registered in Okapi Stud Book, a global record of all Okapi’s in the world. Breeding is done through the guidance of a stud bookkeeper to ensure the purity and viability, marriages are arranged.

Reading the quote of the fledgling Zoologist,a western dandy, seemingly an incipient rookie( his photo abutting the Okapi picture, a clean-shaven foppish face sporting a hipster retro sunglass with a splashy flashy smile, apparently overpowered with that archetypal sprightly fervor when as a new father, one gets to hold the bundle of joy from the midwife), I couldn’t help but ponder the very many reasons why these Arabs prefer Occidentals to Orientals for zoological jobs.

And his quote, “Interestingly, these comely creatures are timid, elusive, solitary and unpretentious” (What? Really? An u-n-p-r-e-t-e-n-t-i-o-u-s Okapi? That is crazy-pants anthropomorphism.How the hell did he gauge the pretension level of Okapis?)

But then, times are changing, this is the 21-st century. China is planning to send a few artificial moons to space to light up its night sky( earnestly hope other superpowers wouldn’t follow suit, lest the night sky will give way to a perpetual daysky), mars tourism brochures are already in print, early birds being offered some discount of sorts, provided they get the booking done directly from Musk’s office( marketing strategies in full swing there too!). So, who knows, by the same token, this hunk of a Zoologist could well be equipped with an audacious pretentiometer rivaling our dear old quivering potentiometer(Freud might well be laughing his head off inside his grave).

I quit, Zoology is not my cup of tea, still, the thrill-seeking lift of enlightened self-interest is hard to cast aside and the allegorical drift in the adjectival string of verbiage, unwitting though, is even harder to shrug off.

‘Mon Cher Zoologist, I do now fathom the bottomless word, decipher the nuances of its connotation, see through its vignetted monochrome, that a creature thus majestic cannot but shed its vainglory and like so this plebeian bids adieu to that proudish legacy of yore’.

View all posts by Deepa

8 thoughts on “Of Okapis and pretension”