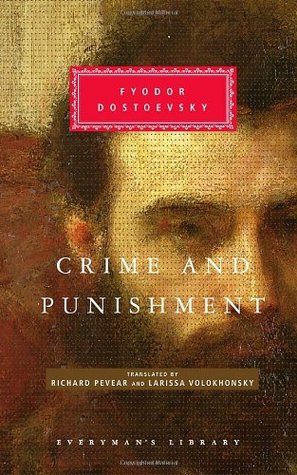 My third try beating the brain out, mustering all idle neurons on the qui vive for delving into the allegories and nuances of Raskolnikov’s thought process that is something akin to a weathercock. The first two readathons seemed like Chinese arithmetic, more like the transcript of Graeco- Roman theatre played in St. Petersburg, that my muddle-pated neurons couldn’t make the head or tail of it nor read between the lines. One of the best ten classic fictions of all times couldn’t be a no-brainer either- Cela va sans dire. So this time, the lecture notes, analysis and summary at the ready and at a click of the mouse helped to see the lost thread in a new light. And the translation by LarissaVolokhonsky and Richard Pevear is on par with the work itself.

Intellectually exacting and viscerally overpowering, the metaphysical elements are still beyond me. Simply put, it’s a psychological thriller, a rigmarole of a crime, no less than murder, justified by the logic of the protagonist, a new esoteric theory put forward by him, that had been put to test. The rationales of the murder are multifarious- poverty, inequality, tug of war between his moral compass and necessitude to name a few. As Sonia( the protagonist’s future lover) mentions in the story, no matter what, the hideousness of the crime merits confession and so punishment as no one could take a life for whatever reason.

Dostoyevsky’s novels are the culture media of new ideas and propositions, by and large, those that had been making rounds in 19-th century Russia in particular, insanity theories, for instance. They depict the societal milieu and vices like drunkenness, debauchery, adultery prevalent during the century. The Marxist theory of dialectical materialism( conflict as caused by material needs) is alluded to in a conversation between the protagonist and others in the novel.

Nineteenth century Russia was a breeding ground of intellectuals and the burgeoning readership buttressed the literati in propounding various theories, out of the box at times, and to make them seep into the minds of masses. Strikingly, many parts of the novel betray the thought processes and religious convictions of the author. Critics inveigh against his support for the Tsars and antisemitism ( ‘The Brothers Karamazov’ has repulsive instances of this), his anti-Jewish stance much more toxic than Charles Dickens, notoriously known for his execrable antisemitism.

View all posts by Deepa

66 thoughts on “‘Crime And Punishment’ – By Fyodor Dostoevsky.”